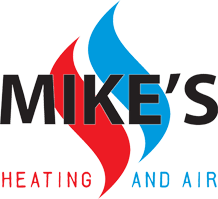 Outside Michael Sykes’ office at Mike's Heating and Air, you can hear the sounds of sheet metal being worked, company vans being loaded with equipment, intense discussions, and bursts of laughter. Glancing around inside Mike's Heating and Air office, you catch a glimpse of who this man is and what makes his life and this business successful.

Just inside the door, hangs a frame enclosing mementos he collected as the son of Frank Sykes, who was also a heating contractor in Albany. Mike grew up here watching and learning about the business. When he was fourteen years old, he began to work with his dad. At fifteen years old, he became the youngest person to attend and successfully complete the Lennox training school. Just two years later, Frank was taken seriously ill, and Mike helped to support his family by running the business for the next year and one half.

Another frame offers glimpses into further events that shaped Mike's Heating and Air life. Here are the Marine Corps medals and pins which Mike earned while serving as an electronics technician on F-4 Phantoms during the latter stages of the Vietnam Conflict. Alongside is his scorched Firefighter’s patch, #48, a memento of his ten years as a volunteer firefighter for the City of Albany.

In 1985, Mike put his life experiences to work when he established Mike's Heating and Air Service. The advanced technology that he learned and worked within the Marine Corps prepared him to understand and utilize the new technology that was emerging in the field of heating and air conditioning. In addition, teamwork, interdependence, and support which were vital to his military and firefighting success, became hallmarks of the relationships he would establish with his employees.

Photos of Mike's Heating and Air wife, children, and granddaughter populate his end table and desk. Trophies and plaques, offered in thanks for his support of children’s sports teams are scattered on walls and windowsills.

All of these speak clearly, revealing that this is a man who loves and is committed to his family, his employees, and his community. These qualities are the foundation stones upon which the life and business of Michael Sykes are built and therein lies his success.